Walk in Hyde Park today. Cold Day Grey cold and lonely. I have a London cold and am completely stuffed up. What am I supposed to expect would happen? More beer than food. But this is slowing down as I am spending far too much cash.

Hyde Park with bare, black bark, bough bent trees, wilting from centuries of cold destruction, would make a very nice cemetery. I looked for the Peter Pan statue that was erected overnight as a surprise for the kids at a playground, now closed down due to vandalism and too many years of use, but could not find him. Saw Victoria and an amazing elven inn carved out of a great old dead tree 15’ high with little elves and animals painted and carved into it. You just do not see things like that in America, but I find day by day that USA is the place to be whoever whatever you are or want to be.

Tonight’s dinner at Fatso’s Pasta Joint. £2.95 all you can eat. Three bowls, two Cokes and one beer. I fell in love with this very cute blonde girl who I even caught looking at me in interest more than a few times and I do not feel bad about this because I had a dream last night in which I came home 2 weeks early to surprise everyone and found that Megen was seeing another.

Maura had a beer at Fatso’s with a flag of blue with 12 gold stars in a circle and I could not figure it out as it was brewed in France and was written in French. It had a 1992 on it twice.

Back at the flat, I learned thru the telly that 1992 and the flag are symbols of the EEC. 1992 being the target date for full flung single mono-political open market Europe. Propaganda beer, but an OK idea. They are moving too fast towards that goal and many people are not for it, as it is kindda a totalitarianistic goal with total rule down to what to feed the cows. Too much control. 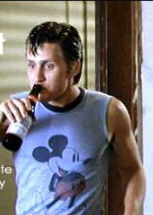