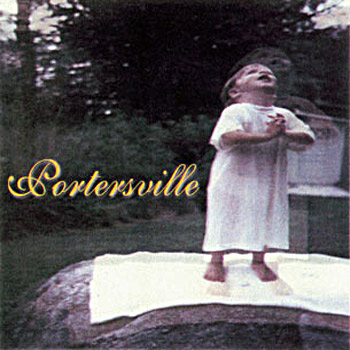 Portersville was a music equivalent to extra innings.  As a fan, it’s like getting a tenth inning of Yankees-Red Sox in late September – while for the band, it was like one more at-bat to realize their potential.

Ultimately, the band was a reimagining of their previous incarnation as 17 Relics. For Portersville, it was all new songs, suits and ties, and a fresh approach to making their music with an ear toward lean pop tunes within concise arrangements.

The way forward would be arduous, as vocalist Michael Fitzgerald and bassist Dave Bentley had relocated to New York City, while drummer Rich Freitas and guitarist Alex Pellish continued in southeast Connecticut.  All four had been making music during the roughly four years since the end of the Relics. Michael and Dave played in and around NYC with Map, Alex joined forces with Paul Brockett to herald in Vera from Alice, and Rich switched from drums to guitar as a member of Delta of Venus. While all of these bands enjoyed some local and regional success, they all disbanded, like the Relics, well before reaching their ideal audience.  However, a long-time fan had entered into an opportune position with a NYC booking agent, and the idea to create a new band from the four Relics began gaining momentum.

Jason Korenkiewich had worked extensively with the Relics while a student at Providence College. Having then recently graduated from NYU in music business, he secured a job working at a well-known small agency, and found that the four musicians were each at that time not playing music for the first time in their lives.  His idea was to showcase the new group throughout New York City, with a concentrated publicity, rather than tour up and down the states as the Relics had in the years prior.

Rehearsals began in the late autumn of 1997, at Centraal Studios in Mystic, CT.  The first six months were a whirlwind, beginning with Michael and Dave typically catching a train out of NYC on a Friday, as Rich or Alex drove down to New Haven from Mystic to pick them up and bring them back to the studio. Practices were held on Friday nights for a few hours, with another long Saturday rehearsal of four to six hours, and then a short Sunday afternoon session before the van ride back to New Haven, and then the longer train trip back home for the New York residents.

The songs began to accumulate.  Notably, nothing was rehashed from the Relics material.  Their palette was much wider, as Michael was playing far more guitar than previous, and the extended block of practice time that was necessitated due to their physical distance sharpened their sound.  Korenkiewich began booking them into a small LES room for a three month run of Sunday shows with support from a bevy of local NYC musicians.  These shows helped them build a decent NYC following, and for the next year and a half they played as many clubs as they could schedule, while Korenkiewich tried to shuttle music industry people in to help promote the band. 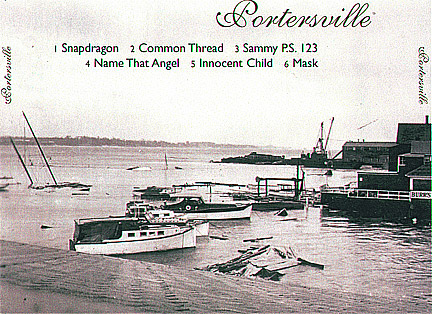 They entered Coffee House Studios in Middletown, CT during the summer of 1999 to record five songs with Michael Arafeh manning the controls.  The songs chosen were an indicator of their new direction:  a rocking soul number from Alex, a streetsmart strut from Michael, a simple back-porch beauty from Alex, a snarling indictment by Michael, and a stirring, somber song from Michael and Dave featuring piano and keys.  These were all the elements around which Portersville created their new music.  By the turn of 2000, they were playing to decent crowds in the city, and seemed poised on the brink of a breakthrough.

The recurring feedback from the NYC audiences was that the live show lacked the dynamics and the intricate detail found in the recent recordings.  Thus, the band decided to branch out and include a fifth member, bringing Mystic guitar star James Harris into the fold.  They crammed in rehearsals with Harris as they had as a foursome back in the first few months, while trying to keep up the rigors of travelling back and forth to the city for shows, and then back to their day jobs the following morning.

The reconfigured Portersville began playing showcase gigs in NYC, and while many of the shows were scintillating affairs, the music business interest began to wane at just the wrong time.  As much as they wanted to avoid touring, the band was travelling the hectic I-95 corridor, working as hard as ever.  But it was like the final batter in extra innings watching as the ball was caught just a few feet in front of the wall.  Their final show was in February of 2001 at the Bank Street Cafe in New London, CT.

The music recorded at the Coffeehouse has never been released, until now.