Every so often, An idea is born. Of course, Ideas are the roots of which art, culture, politics, Music, Sports, Literature, and, yes, even mild conveniences are created. One day, in April of 2005, Incessant Pop Group was hatched from the confines of the minds of Luke Hunter & Jamie Burke. “Let’s start a band!”

It had been a while, considering, of course what the year of 2003-2004 had brought them. Their stabs at making music began with disturbance Of The Mayhem, an ill fated punk group, that collapsed the night of their first performance on stage. this was followed by a long period of contemplated silence. But, in spring of 2005, after being given a funky casio ‘keyboard’, creative differences had begun to fade away, and ideas bloomed like “Flowers on The Hillside”, one of the first songs written and recorded under their new moniker, “Digital Generation”, a group consisting of Luke and Jamie.

Songs were being written once again. they booked another live show, this time at their junior high school, where unfortunately, everyone walked out, They were discouraged, but not ready to give up, determined to make a band that could entertain in a live setting while using drum machines and keyboards, without a drummer. Soon, the dedicated work began resulting in songs like ‘1005’ and ‘Can’t Get my Memories back’ , and before long, the name Digital Generation was changed to Incessant Pop Group, or ‘IPG’ for short. In the autumn of 2005, Julia Farrar crossed paths with Luke and Jamie, and, after some persuasion, decided to come to one of their practices. after playing for a scant few hours, Jaime and Luke realized she was undoubtably right for the band.

They began playing shows in december, their first being a German Club fiasco which ended in someone punching a hole in the wall of the bathroom. However, they had reached that first juncture they had been working for- entertaining electro rock with the drum machines and keys. 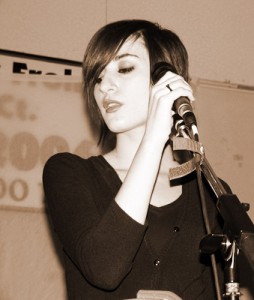 The group then approached dj shecky at centraal studios, a little four track demo room, to possible record their first recordings. Within a few months, they had written and recorded their First EP “Circuit Stroll”, which, after selling more than 100 copies, financed the bands purchase of their own PA, and more gigs began to come their way. In the spring of 2006, they once again went back into music mode, writing songs for the second EP, and, shortly thereafter, went back into centraal studios to finish it up. “Batterie Electronique” was released in October 2006. We can only wonder how many questions are there for the band: “What direction(s) will you go in next?” “How much more can they do?” “Will Luke Hunter find a solid voice?” “What instrument(s) will Jamie play?” “Is Julia ever going to play Synth?” Of course, as with any topic involving music, There will be many, many questions. And yes, they still have that shitty Casio Keyboard they’ve always had.