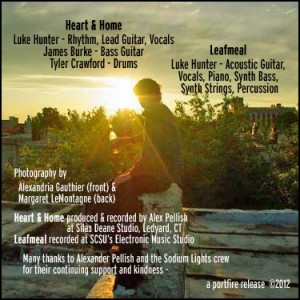 Heart & Home is a proper single, assisted with James Burke on bass, and Tyler Crawford on drums. It gets in your head, it gets in your heart, and it hits straight home – a masterpiece and proof that Luke has truly become an artisan songwriter. The production and mixing, by Alex Pellish (17 Relics, Portersville, Vera from Alice, Highlighter, Sodium Lights), further refines and enlightens this immediate indie rock classic.

And queued right up, the backside features the daedalian guitarwork of Leafmeal, fleeting across unraveling midsummer meadows, across balearen lovers spread out beneath the wide blue sky – twirling in so many memories brought back from the fade – 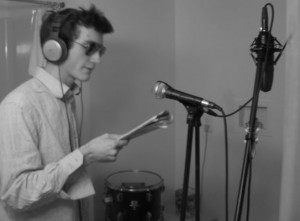 Luke Hunter’s debut album, Dizzying Heights, is a night-time excursion into neo-psychedelia, post-rock, and ambient sound-scapes, revolving around sustained, echo-laiden guitar, flowing about rhythms – coupled with abstract guitar structures, and those darkest of pop hooks intertwining with bass and keyboards.

All is woven together for you to enjoy as pure improvisational ingenuity, caught on tape…

Here are some notes from the author about the Dizzying Heights lp:

Dizzying Heights as a written work wasn’t written at all, so much as conceptualized in over fifteen different sessions by myself, with help from a few good friends. On the whole, the goal was to create something solely on a whim – experimental music in the sense that it is born while undergoing the recording process, not just a product of sitting down with the standard verse-chorus-verse formula in mind.

Seeing as how I feel this old formulaic standard has gone so far as to eat itself in recent years, and leave little creative input to the artist, it is fitting that this recording is an antithesis of what music once was, a culmination of feeling.

This music is raw feeling – pure emotion on tape, caught in the act of creation (and destruction), instead of just being built up. The music can retain grit and personality.

Forgive me if the first-person singular is used overwhelmingly in the lyrics, but this in itself is a testament to the authenticity of words being crooned. Each song is a definitive view of what was in my skull at the time, and these songs should hopefully instill new sensations in you, the listener.

In due time, the goal of music should not be some esthetic appeal, catchy tune, or fashion, but rather a transmission of feeling. And if music can do this, then it is good music by any standard.

Luke Hunter, drummer of the band Thick Thieves, has released his first self recorded/produced solo record – quite ambitious for a young man. Dizzying Heights has a mellow, ambient sort of vibe without being too spacey. Like the Thick Thieves, the sound of the record is definitely more rooted in “classic rock” or even early “alternative” rather than the indie rock which most his peers are playing.

Unlike the Thick Thieves it doesn’t have that folky southern rock thing going on. The layers and textures are what make the record what it is. The reverb and delay are caked on this record… it’s what gives it the ambient sort of feel but it can be a little much. About halfway through the record they stop being a texture and almost become a whole other instrument. The instrumentation is nothing out of the ordinary: guitar, bass, drums and keys – but everything is fattened up and aired out to make it sound like much more. The song writing is almost post rock-esque at points, it just moves from one thing to another in a constant stream, never turning around to remind you what the chorus was. This can be a difficult style to make work but Luke does a good job making sure you don’t get bored or confused as the songs drift along.

Most people would probably consider this an incredibly melancholy record, especially with the Radiohead cover at the end. I don’t see it that way. Mellow and melancholy, though containing a lot of the same letters, are not intrinsically linked. I would say that it’s introspective – a thinker – rather than just writing it off as sad. This record shows a great deal of promise… Luke wears his influences on its sleeve but his influences are not common in this area of CT and it’s his debut so that’s more than forgivable. I’d like to see this be a continuing project for Luke to see the path it heads down.