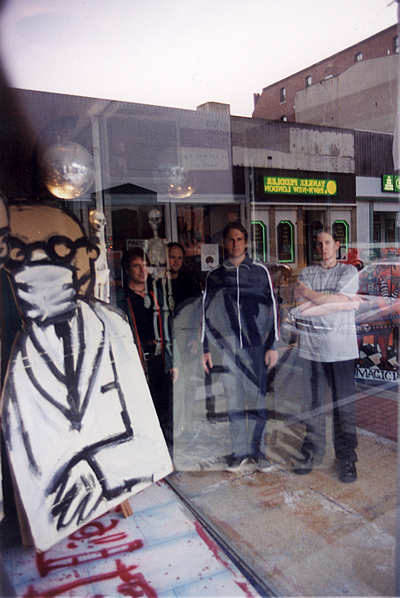 Floating upside with ears full of saltwater, a rush of song comes in. Seratonin sets a tune to hums, vibrations and cochlear static. Pulses formed around chorded chaos. We arrange the pieces into segments with names. writing the pattern into a place we can hallucinate, resetting the place of ears and emotional swells.

Us four partners were grown on the coastal Connecticut. To its ambiance we banged around in cars and made mad sounds with electrics, electronics and howling. Always with internal agreement that the volume was pleasure, freedom of voice, and kind memory.

Mr Tarbox and Rich and CJ created the sonic experiment Skimbleshanks. Most dangerous game in smalltown, with hellbent vocal and a 3/2 time injection. Shawn Fake was the drum luster and machine of Mindbender. These first bands crash and burned. Rich ran on to hero rock Grand Passion. Tarbox-Fake team designed Cocteau-beat Delta of Venus. CJ gathered sweet Magpie melodies. Magnesium metal, this parallel goes, is only lit with the concentrated energy and focused vision of the whole tribe.

Elemental realignment happened in Summer of 1999 in the basement of TAZ nightclub, New London to form Seratonin. Sounded like hitting the chimes until the devil hand danced in the puppet workshop. Us boys could then hum this show tune for days, even if separated in soundproofed rooms. This started creating the illusion of mindreading and sharing of mood space; the extra dimensions of the experience that block out crass grumblings of arguments, misgivings and money.

Seratonin is that sweetmilk. Strings create a glow and drums start a swing shaking out the melody, so Tarbox can get on and ride through psyche and emotion turning the spell and chant into language.

Uptake was the first and only release from Seratonin, a band with deep routes in the Mystic scene (featuring members of Skimbleshanks, Mindbender, Magpie, Delta of Venus, and Grand Passion) and the precursor to Low-Beam. In fact, a handful of the songs on this collection carried through to that band’s set and are even featured on the forthcoming swan song release ‘Charge of the Light Brigade’.

The record was recorded in the basement at Secret Theatre and features Mat Tarbox on vocals, Shawn Fake on drums, CJ Stankewich on guitar and vox, and Rich Martin on bass. When Tarbox and Fake left the band, Rich Freitas took over on drums, and Jaimee Weatherbee paired up with CJ for vocals. The group would evolve into Low-Beam. 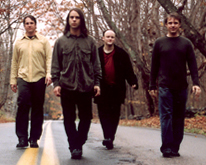 “Comprised of Rich Martin on bass, Mat Tarbox on vox, CJ Stankewich on guitar and Shawn Fake on drums, the band sounds at ease, like it hails from a rather understated, very un-rock place. Their songs are quiet but effective, without the obvious bluster of power chords or the aggressive qualities of so many of today’s hard rock bands.

“In fact, you can tell they’ve spent a lot of time listening to bands like Luna, Yo La Tengo, and Spiritualized (a band they mention in the liner notes). They don’t get too mopey like the former, and they don’t quite delve into psychedelia like the latter, but they do enjoy an effervescently melodic middle ground, especially on songs like the disc-closing “Relapse” and the hushed but impacting “Cleopatra.” Tarbox’s voice complements the understatement nicely as does Stankewich’s guitar playing. The arrangements and performances are minimal, tasteful, never overdone. A promising debut bold enough to be firmly indie rock.” – Bob Gulla