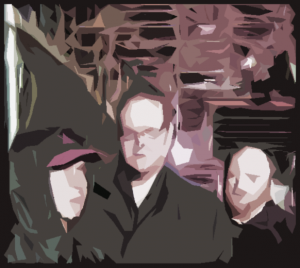 In September 2012, Sodium Lights released a follow-up single to their Transtulit LP from 2011. After the sessions that completed Transtulit, the band decided to go even further into the deep house foundations that made up the electronic side of the groups’ electro-rock.

The guitars were put inside their cases, and programming began in earnest during the winter of 2011-12. The band wrote an album’s worth of new material in a few months, and singer Julia Farrar began to add vocals to the rough ideas. As the songs began to take shape, the band began to realize that releasing a single from the best of the accumulated material would actualize the ideal of the “trance pop” songs they were trying to create.

Instead of following up 2011’s Transtulit with another full length LP, Sodium Lights decided to release singles of these sessions, of which “Slingshot” is the first.

Transtulit, the second LP from Sodium Lights, mixes the soulful backbone of a rock band with the rhythmic elasticity of house and electro.

In May 2011, Transtulit won a Top Critics Award for Indie/Punk/Alternative Album of the Year at the Whalie Awards.

The 12-song LP was recorded at Silas Deane Studio in CT, and was written, arranged, and produced by Alex Pellish with Rich Freitas and Mat Tarbox.

In July 2009, the band released an eight track single including three remixes of the song “Safe Heat,” off of their first LP, Post-Signal, with five b-sides that show off their rougher edges.

“Tunnel,” the second song on Transtulit, is featured in this Song Spinner video at TheDay.com, produced by Peter Huoppi and Rick Koster. The band explains how the song was conceived and developed, along with vocalist Dawn Salerno, who describes how the themes and lyrics all came together:

Alex Pellish, Rich Freitas, and Mat Tarbox worked together in several bands throughout the 1980’s and 90’s. During this time we also recorded four-track songs in basements and apartments between Mystic, CT, Storrs, CT, and Chapel Hill, NC – while playing in seminal Mystic groups such as 17 Relics, Delta of Venus, and Skimbleshanks.

Cue the spring of 2007. Pellish has finished building a full recording studio, and wants to test drive the new equipment. He approaches Freitas and Tarbox to record rough improv jams. Six weeks of sessions produce twenty-one raw songs, which Pellish then arranges from select captured moments. Coupled with two months of drum programming and sequencing, our first LP Post Signal arose from what we felt were the most viable drafts.

We began to realize that to finish the tunes properly, we would need to call upon a diverse group of musicians who could complete each individual song. These outstanding voices would enhance the essence of the LP’s sound and scope during their limited time in the studio, helping to elevate the work.

Both albums were mastered by Michael Arafeh at The Coffeehouse, Middletown, CT –