This, my friends, is where the real adventure starts. One minute I’m on a bus looking around and the next I’m walking around downtown Liverpool at 6AM, dropped off on the side of the road. No map and nothing is open. Irish money in my pocket. Boy oh boy am I lost!

Everything is really BIG and serious, like the biggest, oldest inner-city university you can think of, only bigger and, for all I know, it stretches forever.

Now I have to wait for a cop and ask him what’s going on. It’s so cool. And chilly, too.

OK, Toto, I’m not in Kansas anymore. While looking at a beautiful Jaguar, an even better Lotus drives by.

Walking the streets and whatever Captain’s Walk walking mall type deal looking for tourist info center, whose signs just stop passersby look at me once in shock, twice in fear that I am maybe a mugger, and third in shock again.

The sky grows bluer and lighter and I have already seen a couple of things I want to do. But as it gets lighter, the temperature gets colder.

Imagine falling into the back of a twenty dollar bill with the people walking the streets in front of the White House. Imagine that happening and the colors stayed the same fake green and “white”. That is Liverpool with statues on top of pillar 300 feet up. It seems that their only two claims to fame are Pirates and The Beatles.

Oh my god, only thirty minutes ‘til nine! Then the tourist place and the money exchangers will be open. For now, tho, I’ll sit in this mall on this bench enjoying the warmth for as long as the security guard will allow me. In this waking period, I have done a lot and there will be more as I plan on being in Manchester tonight. I am so tired and hungry and there is a little dive coffee place with cheap breakfasts not 50 yards away, but I’m sure they don’t take Irish pounds or US dollars.

I’ve been dying for pancakes or waffles so I went into Mickey Dee’s for some hot cakes and sausage – but they don’t have them! What kindda place…

A seven hour “nap” and my first hot, powerful shower since leaving the US! Amazing how a hot shower can make you feel so great and alive. Some how I keep falling into La-de-da places, this a pizza place but unlike any pizza place I have ever been in before. Dimly lit, really nice décor, etc. (Rich, Grolsch is the only good beer.) Woman next to me ordered a half-rack of ribs and could not believe the size, and neither could I, with corn cob and salad and enough food for three people on one plate. The radio or whathaveyou plays a bit too loud and every song is by an American band! Let’s hear some English or even European or maybe Australian bands!

The best part of traveling alone is alcohol. How do I know when I am drunk if I can’t bounce it off of someone? How do I know that I’m not just wrapped up in thought because no one talks to a lonely traveler who looks as I do, with crazy just combed with a towel hair and a big, black army coat and a devil beard. That’s why on the second night of The Cure at Great Woods I did so much of even harder if you will drugs pot and shrooms just without end for the whole lonely amazing show. Because I was alone and did not realize how gone I was until I got with friends again.

Finally! A song by The Police! But after they were big.

Space capsule church high on a hill looms in front of me walking night university streets of Liverpool Dump Beatle-home. Pound coin as good to me as penny spent given to young artistic-looking beggar who knew Boston and the Truth of heartache. Yound black-haired girl leather jacketed tells me all of “Nutin’” when asked what to do in this Northern Hole.

Oh, sleepless night, leave me to myself. Lead me to my friends in dreams and Truths.

I can’t believe that I am in England, alone, posing as Post Warrior and suffering from all kinds of withdrawals. Liverpool is such a lovely town when you’re the only one in it at 6 in the morning.

I believe that if you search hard enough, Truth can be found in England. They are very critical and tell exactly bluntly what they think of a subject. An ad for a recently opened art gallery asks just Joe Fuck Shopper to come by and criticize! It is a confusing place, tho. Four, count them, four different types of stamps! I don’t even want to know about pay phones yet.

Older women walking in and shopping on streets model themselves after the Queen or Thatcher. Older men are very serious and stern faced with backs so straight that they almost lean backwards. After their generation, no one gives a shit and is just living life or going thru the motions of it.

The Irish and the English are, obviously of course, two different gene pools, but that comes as a shock when you see how different they are. Irish older men have very definite signs of alcohol abuse in their worn out faces , which sag and hang and look like they’ve been thru years of worry. English older men have plump faces with very few wrinkles. In general, English women are ugly. But occasionally you see a beauty. And there is nothing in between. Of course, tho, the beauties are probably Irish. Facial structure is opposite. That is where the Irish have concave noses, the English have convex. Very strange.

This picture is roughly the veins and walls of my Liverpool room. It is actually much smaller than this, with yellow walls and flesh-colored pipes, which really do look like veins staring at me from the other wall. This is the view from laying in bed. The whole room is about 10’ by 6’ and actually has the classic view of brick wall outside the little window next to (but not shown in the picture as I ran out of paper but really did want people to see it) the sink. I guess I have to work on my 3D! 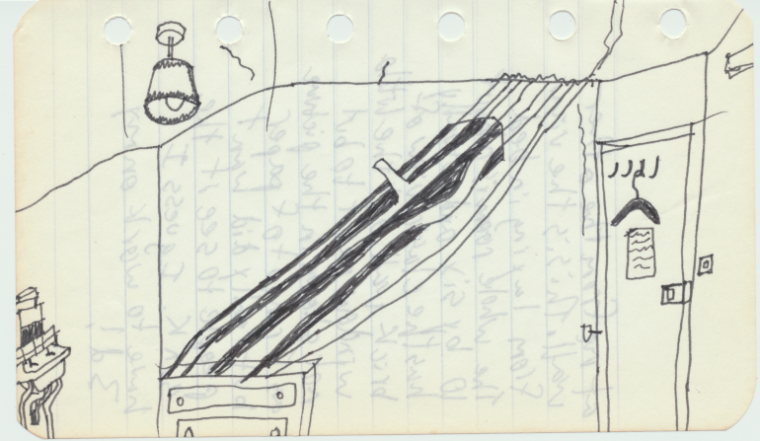