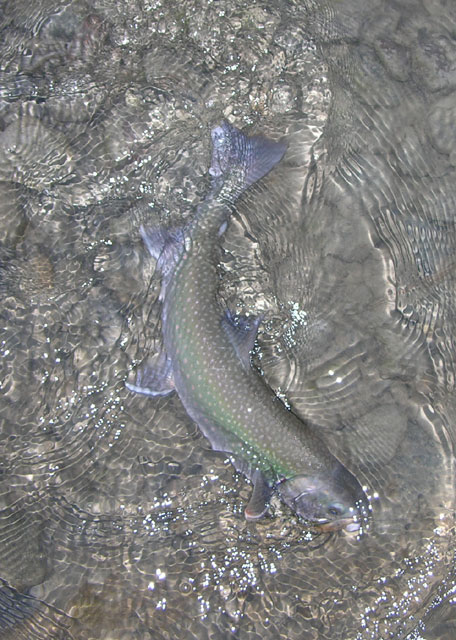 Fall on Alaska’s riversides reeks delightfully of the sweet smell of composting vegetation and the sour, pungent aroma of rotting salmon, spawned out and left to decay on the bank by the recession of high summer waters or left half-eaten by any of a number of their predators. Those still surviving are crimson, snaggle-toothed, hook-nosed, and rotting alive off of their skeletons as they swim weakly over their redds. Their eggs and trailing strips of flesh become an autumn bounty for trout, char, and grayling.

Dolly Varden (Salvelinus malma) were affectionately named after a Dickens character and are an anadromous char related to brook trout, lake trout, and their nearly indistinguishable cousins, Arctic char. They can be found in fresh and salt water between Puget Sound and the Mackenzie River. In summer they are a silver-sided fish like salmon, and during autumn spawning take on the colors shown here. Unlike Pacific salmon, they do not die with the deposit of their eggs. Through the 1920’s and 30’s they carried a bounty on their heads because they were seen as the primary predator of young salmon, a perception that was proven to be erroneous. Though still not highly prized as a game fish, they now receive protection across the state of Alaska, which limits angler take, and in some waters they are regulated as catch and release.

This specimen was taken and released unharmed from the Kenai River in Sterling, Alaska, using a fly designed of chenille, feathers, and rabbit fur to imitate torn salmon flesh.