Allow me to explain the legend of Chicken Charlie’s Rock. As you may have gathered, my daughter Marley has nothing to do with the tale, paths with Charlie having crossed nearly two lifetimes ago from her vantage point.

She simply accompanied me on a trip down memory lane. (Her sister Jules, aka Green Machine, was back at grandma’s house, glued to the weather forecast praying for snow).

Naturally, the trip included a handful of slow laps around the same parking lot where my grandfather first let me drive. I was twelve, thirteen tops. Having just turned thirteen, Marley got her turn at the wheel, the same as I did–no gas, permitted only to ease a foot off the brake pedal, achieving no more speed than cruising on idle would allow. Still, I imagine it to have been as exhilarating for her as it was for me, sitting beside my grandfather in my mother’s newly acquired used car.

Chicken Charlie’s Rock started out simply as The Rock, a massive granite protrusion that I have since come to recognize as endemic to the New England landscape. Our rock sat in the woods just behind the Village Green Apartments where my sister and I moved with our mother the year our parents split up. In time, Kim found her set of friends and got on with her thing. And I found my set of friends, Gary C. principal among them. We spent the vast majority of our spare time exploring the woods, at first on foot, then by bicycle. Eventually, we acquired motorized transportation allowing us to explore the far reaches of the woods by dirt bike, a string of secluded waterfalls leading the way to an abandoned rock quarry. The details of our gas-powered antics will have to wait for a future installment of my tales of a kid from Connecticut, making his way in the world.

The Rock played a central role as home base for our activities during breaks from school. We waged one-pump BB-gun wars on and around the rock (thankfully, no one shot their eye out). We built forts. Debriefed atop the rock upon successful completion of our daily excursions, conjured future plans sitting in full survey of the entire universe as far as any of us was concerned. We formed and strengthened bonds on that rock, tested allegiances. Through thick and thin, we grew up together.

Last and most certainly not least, I had my first kiss on the rock. We can debate whether woman or man is capable of achieving perfection. Whether any of us would know how to conduct ourselves if perfection were to show up one day and plop down in front of us. Still, I am eternally grateful to have borne witness to the tender beginnings of what I imagined at the time to be as near to perfection as might ever exist–Andrea P.

Andrea was outgoing, energetic, athletic. She would hang with us most every day, doing anything we could do and then some, though we never lost sight of the prospect that Andrea was separate from us. She was GLORIOUS–outgoing, energetic and all that jazz, and glorious to boot.

I can still picture her–even brown skin with deep set eyes like she was imagining things bigger than the rest of us were capable of comprehending and a mouth that made you wonder why lips were ever used for anything other than kissing. It would be years before I’d get another glimpse at perfection, that shift in perspective that occurs when you meet someone so far removed in thinking, in examining the world from anyone you’ve encountered, who inspires you to be more than you might have known achievable without the benefit of her outlook.

Even Andrea can’t claim responsibility for the naming of Chicken Charlie’s Rock. Charlie was a kid who moved to Village Green a couple of years into the rest of us having settled in the neighborhood. He earned the Chicken part on account of his run–stiff and upright, a cardboard cutout of a kid pushing like a sheet of plywood against a determined wind. A thick mop of rust colored hair stood on end, flopping in rhythm with the breeze to form the crowned comb atop a rooster’s head. This coupled with an innate chicken-shit demeanor and Charlie couldn’t hope to escape the nickname.

One summer, we found ourselves in possession of a length of sturdy rope. We tugged on it, swung on it, bound and tied various things with it, Chicken Charlie included if memory serves. Gary and I eventually got the notion to drop the length of rope down the face of the rock and scale the damn thing. This was well before rock climbing was popularized as sport, housed in purpose-built gyms. Instead, we climbed to achieve the pinnacle of adventure for boys growing up in Village Green.

For reasons I can’t remember, Chicken Charlie accompanied us on our maiden voyage, our trusty rope securely in place. But, being Chicken Charlie, he couldn’t be convinced to venture a climb. After several successful roundtrips apiece, Gary and I headed down the face for lunch. When we stepped outside again, we were met by a high-pitched screeching. We took off in the direction the woods where we found Charlie dangling from the length of rope having steeled his nerves to attempt the climb in private, free from jeers over his upright, stiff, plywood way of doing things.

Whether midway up or midway down the face, only Charlie can say for certain. But there he was, clinging for dear life, screaming at the top of his lungs for somebody to save him. We sprang into action. I took my place as spotter at the base of the rock should Charlie lose his grip and fall the rest of the way to the ground while Gary sprinted around to the summit then scaled down the face and escorted Charlie to safety–all in a day’s work for a couple of boy adventurers. And that’s how The Rock came to be known as Chicken Charlie’s Rock.

Everything changed after school resumed that fall. Andrea advanced to junior high leaving us to toil another year steeped in our elementary school, king of the hill, BB-gun warrior nonsense. She and her family moved out of state within the ensuing year. Gary’s parents found more spacious digs to accommodate their brood a couple of streets over, within the same neighborhood. But that quashed nearly all activity around the rock as the center of our daily adventures. Chicken Charlie eventually disappeared too. I can’t tell you with any certainty what any of us did the next summer. Some things together, many other things apart from one another. Junior high and high school eventually exposing us to our respective, separate new worlds. But that summer forged bonds that have persisted to this day.

I have limited interest to unearth what became of Chicken Charlie. But look who I found via Facebook–Andrea P. decades removed from those days on The Rock but little worse for the wear. And still Glorious. (Images used with permission.) 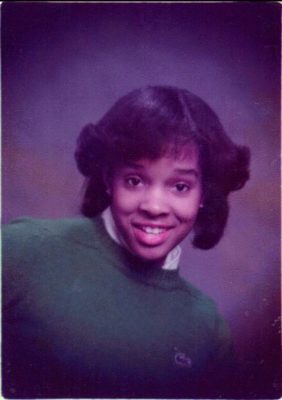